The river was low for most of the summer because of the low rainfall in Cumbria, meaning that the hydro could not operate. You may have seen on the news that Cumbria experienced flooding recently. The hydro does not operate when the river level is too high. However, gravel does not appear to have been deposited in front of the inlet and the hydro is now working again as you can see in the video below.

Now what we need to do is keep the hydro operating for as much of the winter as possible.
We will be keeping an eye on the gravel build up and intend to apply to the Environment Agency to remove it if, and when, it becomes a problem. In the past permission has not been granted but we have some evidence from the fish survey that such removal, if done carefully, should not be a problem for the fish.

We also intend to investigate other possibilities to improve the hydro layout with a view to reducing the gravel build up permanently, but this will be subject to Environment Agency approval of any proposed changes.

On 5 February 2018, after a series of setbacks and difficulties over the two years since the share offer, the Archimedes screw turbine at Killington successfully completed testing and is now connected to the National Grid.

The video below shows the turbine generating! 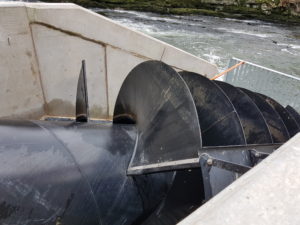 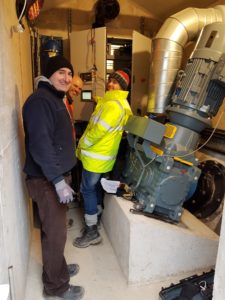 Following one of the wettest Cumbrian summers in 30 years and after some delays to the programme, the Archimedes screw has been fitted into the Powerhouse. This is a significant milestone in the project and the team have all worked extra hard to make sure the infrastructure was ready before our permit to work in the river ran out.  After all the rain, it was a bright sunny day when the crane and screw arrived on site. 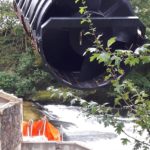 Screw lifted into the water 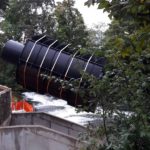 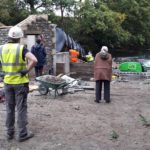 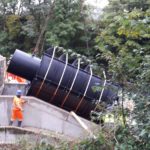 Screw going into the river 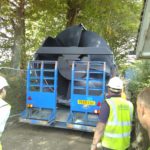 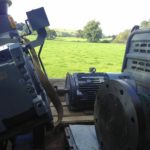 The generator and gearbox

Stonework on the powerhouse 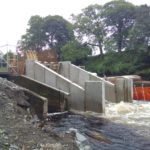 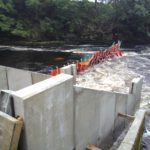 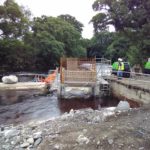 A press release from Co-operative Energy

An overwhelming majority of the public would support local renewable energy projects, including wind turbines, if they were owned and controlled by the community, according to new research from Co-operative Energy. This includes not just Labour, Liberal Democrat and Green Party supporters, but also those who identify with the Conservative Party.

More than two-thirds (67 per cent) of the 2,000 UK adults polled said they would support local community-owned renewable energy projects such as wind turbines, with just 8% in opposition. Support among Conservative voters increased from 62% in 2015 to 65% in 2016.

A staggering 78 per cent of the public thought that the Government should do more ‘to help local communities generate their own energy, with profits staying in the area’. Just 6 percent opposed this. Again, support among Conservative voters increased, from 73% in 2015 to 76% in 2016.

Two-thirds (68%) of respondents say that they are prepared to pay a small surcharge each year on their energy bill to fund an expansion of community energy, with just 15% opposing this. While 58% believe that the Government should change its mind and once again offer tax relief to those individuals who take the risk of investing in community energy, with just 12% against. Backing for these measures was higher still among Conservative supporters.

More generally, more than half (52 percent) of those surveyed said they would support a wind turbine within two miles of their home – nearly three times as many as the 18 percent who would oppose it. Support among Conservative supports increased from 43% in 2015 to 47% in 2016.

Support for solar farms was even more overwhelming: with 61 percent of the public supporting a project within two miles of their home, and just 11 percent against.

Ramsay Dunning, Managing Director at Co-operative Energy said: “This poll shows that the Government’s recent hostility to further growth in onshore wind turbines and solar farms is out of kilter with the vast majority of the UK public, including Conservative Party supporters. Moreover, people want to see growth in local, community-owned projects and are willing to pay a small surcharge on their bills to help this happen. Co-operative Energy and the Energy Savings Trust have previously calculated that for just 25p per customer per annum, the UK could grow its community energy capacity from 200MW to 3,000MW in a few short years. The newly formed Department for Business, Energy and Industrial Strategy (BEIS) and its welcomingly engaged ministers have a fantastic opportunity to tap the public’s goodwill and provide a significant boost to the UK’s social enterprise economy.”

Will Dawson, Head of Energy at Forum for the Future and Chair of the Community Energy Coalition, said: “As we embark on the fourth Community Energy Fortnight from 3-18 September 2016, I am really pleased to see support across political views grow even higher for communities owning and benefiting from their own energy projects. The CEC members see a rapid switch to renewable energy communities and energy efficient homes and businesses as vital for Britain’s future. We want the government to stand with us and do more to help British communities take control of their energy locally.”